During the Future TV Advertising Forum in December, Jay Chinnadorai, Managing Director at Sumtotal, chaired a discussion about the impact and potential of Connected TV and Hybrid Broadcast Broadband on advertising, starting with the all-important question: what does Connected TV provide that traditional linear TV does not. Matthew Kershaw, Content Director at BBH (Bartle Bogle Hegarty), the strategic and creative agency, said it gives you targeting, measurability and interactivity, but of these only interactivity is unique.

â€œYou could easily argue that targeting and measurement is performed incredibly well by existing television so that leaves you with interactivity and that is potentially exciting if it can be made easy enough, which frankly, has never happened yet,â€ Kershaw said. Chinnadorai challenged the assertion that a connected TV or hybrid set-top box cannot deliver more measurement. â€œYou can go down to a single IP address whereas BARB covers households,â€ the chair noted.

â€œThat is true but the question is to what degree that level of measurement is useful,â€ argued Kershaw. â€œI think it is useful for a very small local business and there is an interesting opportunity if you segment your sale into a very small geographic area, as Google built its business with small-medium enterprises rather than big brands. But big brands will ask whether it can actually move their brand or whether it is just another form of direct marketing.â€

Shirlene Chandrapal, VP of Connected TV at smartclip, the multi-platform video ad network, disagreed. She thinks BARB (and therefore people meter panels generally) is not sophisticated enough to cope with what advertisers need today. She hailed the combination of television screen real-estate with the data and measurability of the Internet that Connected TV offers.

At the same conference, Jeff Siegel, SVP Advertising at Rovi, said more accountability is exactly what advertisers are looking for when they buy advertising on Connected TV. Rovi provides the opportunity to advertise within the EPG on connected TVs in Europe and has been working with Samsung on field-trials in the UK and Germany to help advertisers understand the new medium. Confirming that advertisers are actively looking at this medium, the company completed its 1,000th Connected TV advertising campaign in December.

Roviâ€™s marketing theme is currently â€˜Why buy advertising space like it is 1960â€™ and Siegel declares: â€œThis is not about killing the 30 second spot. People are not taking money from the 30 second spot when they come to us but the money is coming from outdoor advertising like buses and billboards and from print â€“ all media that are less accountable than what we can offer.â€

The Connected TV/HBB panel discussion moved to the merits of having programme-related social media conversations or weather apps on the television screen or companion devices, at which point Kershaw declared: â€œWe can get hung up on the idea that everything should be on the TV. At BBH we say it is not about Connected TV but about connected people watching TV.â€ For him, most of the complementary information surrounding TV should be on tablets and smartphones, though Chandrapal argued that the complementary activities will happen on whichever device makes it easiest.

Samsung and Philips represented the major CE brands and Dan Saunders, Director of Content Services for Samsung, emphasised that his company respects linear broadcasters and their content, and does not interrupt their programming or overlay services, with the exception of social media feeds alongside a broadcast. Apart from this, the broadcaster is in control of their own content. His point is that Samsung is working with, and not against, broadcasters.

Gary Knight, Commercial Content Director at ITV, the UKâ€™s largest commercial broadcaster, expressed serious concerns about Google as a partner (notably the possibility that they will want to be inside the screen, tracking what his viewers are doing) but he had a much more conciliatory tone for Philips and Samsung. He would not rule out the possibility of sharing advertising revenues with them, for example, and Samsung made a point of explaining to the London audience that in many cases, advertisers interested in Connected TV will deal directly with content owners as they always have.

Outlining the opportunities for advertising on Connected TV, and the likely impact on the existing media value chain, Saunders explained: â€œThe first way is through the content channels they [advertisers] are used to working with, like the broadcaster with catch-up services, where you talk to the broadcaster. The second opportunity is with niche content players who have been in the Internet space and have built applications that make content available on different Connected TV platforms. They [advertisers] would work with that content provider directly or work with an advertising network like smartclip. Another way to engage with connected TVs is to build applications yourself, if you are a content-rich brand, and start experimenting with that relationship.â€

Samsung believes there is lots that advertisers can do with Connected TV platforms but Saunders wanted to emphasise that his company has no wish to innovate in a vacuum. â€œWe would rather make sure our platform addresses the needs of agencies and brands and that conversation needs to be happening now if you want the CE manufacturers to build in ways that match your own objectives.â€

Chinnadorai suggested that there was no scale yet for advertisers looking at Connected TV. â€œYou will see scale quickly,â€ Saunders declared. â€œBy 2013 the majority of TV households in Europe will own a connected TV.â€

In another important development that will help build scale, Philips has partnered with LG, Loewe and Sharp to create a common platform for content, apps and advertising. Richard Musch, Director of Business Development at Philips Net TV, pointed out: â€œDevelopers publish their apps and those go onto four different platforms.â€

The panel acknowledged the need for more standardisation, whether for content (including advertising) delivery or for the metrics used to measure and justify spend, and there was also a recognition that the measurement on connected TVs might need to be independently audited. Saunders again called on the advertising industry to work with Samsung to define what they want. â€œMetrics is not our field and we respect the experts at the agencies. We will continue to innovate like a naughty child but we want to make sure we are innovating in the right direction.â€
This concludes our coverage of the annual Future TV Advertising Forum. You can see our other stories from this event below. For more information about the conference, go here. 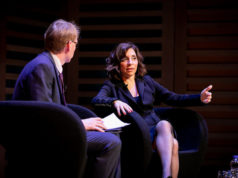 More effective TV advertising: the ‘how to’ conference you should not miss