Home Analysis The SVOD that wants to be No.4 in every market by curating...
Share on

An innovative SVOD service is preparing to launch in the U.S. this spring that, if it gets its wish, will eventually aggregate content from hundreds of other SVODs in an effort to become the fourth or fifth largest streaming service in the market. It wants to offer consumers an easy way to buy content from most of the subscription streaming universe under one roof – thus the belief that it can become such a powerful player. The plan is that the U.S. launch will be followed by an international roll-out.

Notably, the company believes it will partner with SVOD No.6 through to SVOD No.300+ (approximately) (numbered by market share) in a given territory. This ambitious launch is not about serving the very long tail, but reaching the mainstream of a growing streaming TV audience.

Called Struum, the new streamer will ingest and host the content itself, so this is not a content discovery hub that hands off to apps using deep-linking. Media partner brands will be protected. It will use a payment model where a Struum subscription is converted to credits that can be used on individual content assets that could come from any of the hundreds of service/content partners who are present on the platform. The company says the monthly price will allow someone to watch at least one hour per night on the service.

Struum was founded by former Disney and Discovery executives Lauren DeVillier (who is CEO), Paul Pastor, Eugene Lieu and Thomas Wadsworth, and is backed by former Disney CEO Michael Eisner’s Tornante Company. Firstlight Media, the lead tech provider behind the service, is also an investor. Struum will launch with close to 40 SVOD partners already under its roof in the U.S., adding up to 20,000 content assets, it has been revealed.

Every SVOD that is represented will be paid a revenue share for each of their content assets that is watched. Thus, consumers will be able to move seamlessly across a diverse library of content without navigating multiple apps or paying multiple subscriptions. And that is the core consumer value proposition. You will not have to commit $6.99 or $9.99 to a single media brand in order to access their content and then repeat that process with multiple media group apps.

Struum is not intended to compete with the giants who make up the top three or five SVOD services in a market. This new service is intended to aggregate ‘the rest’, which will still include some of the biggest names in television and movies. If the service were named ‘The Next 300’ that would give an idea of what they are trying to become. The vision is that Struum will become part of consumer habit – one of the first VOD services anyone turns to together with Netflix, Amazon Prime, Disney+, HBO Max or Hulu, for example.

Paul Pastor, Chief Business Officer & Co-Founder at Struum, believes that without a service like this, U.S. consumers will work their way through the streaming majors as part of the new discovery rituals that are being formed, “before being dumped in a wide ocean of services where they neither know the brand behind them or the value proposition.” He explains: “We can become a point of aggregation, their third or fourth choice service.”

Once inside this new service, Struum will provide viewers with a friction-free journey to content from the rest of the digital market, providing serendipity (thanks to the vast and diverse content offer) but with the curated intelligence that goes with advanced data analytics, user profiling and data-enabled content recommendation.

The service is built on a cloud-native streaming platform created by Firstlight Media and hosted on Microsoft Azure. Firstlight Media boasts more than 110 microservices, player libraries and UI clients, and provides AI/ML capabilities as part of its comprehensive solution. Struum also makes use of Azure AI technology.

Pastor emphasises that the focus of the service is the aggregation of “aspirational” Tier 1 and Tier 2 SVOD partners who fall outside the Big Five in a given market (and the focus initially is on the U.S.). Struum’s SVOD partners will range from traditional content owners who are migrating their busines to D2C to what Pastor calls ‘passion services’ that have highly targeted and niche audiences.

He reckons Struum will give partners the chance to gain more time and attention from consumers and to become part of their entertainment habit, helping to scale their own digital businesses. Passion streamers “can draw more light to their service”, as he puts it.

It is easy to see why the 200th largest streaming provider in a market might want to get itself into a large shop window but why would the No.6 or No.10 SVODs want to cooperate with Struum when they have the investment and marketing power to push their own service brands hard?

Because most want multiple front doors to get consumers into their funnel and will welcome efficient customer acquisition, Pastor argues. “We are providing more points of discovery and promotion for their content.”

He says the frictionless discovery and consumption is the most critical piece of what his company offers to potential partners, with fewer opportunities for consumers to be distracted from watching TV, even if there is more content competition within the service itself. “Even services in positions No.7, No.8 or No.9 [as examples] need to fight to become part of our daily habit and ritual at a time when the market is so disrupted that you could lose that time and attention,” he suggests.

Pastor also highlights the opportunity to attract secondary and tertiary audiences who would not subscribe to the content owner’s own app. “There are people they [potential SVOD partners] will never get across the subscription threshold but who would like to watch one or two of their shows.” These consumers are viewed as an incremental revenue opportunity for the content partners.

Struum also provides an opportunity for ad-supported media companies to experiment with a hybrid model without going so far as introducing a paid tier on their own player services. The company is in active conversations with AVOD providers about this.

Pastor is confident Struum is part of the customer acquisition and retention solution for its service partners. The company will manage its own direct subscriber relationship using its understanding of the full catalogue (which it hosts) for smart curation and content marketing. Struum believes it can help partners optimise their asset pricing (each partner determines how many credits each of their content assets should be ‘sold’ for).

At launch, Struum will have a single price but could later introduce tiers that give consumers the opportunity to consume more. And if someone is watching a lot of content from a particular SVOD provider’s catalogue, they can be moved onto a subscription for that SVOD partner, at which point they keep watching the assets within Struum but the views are no longer deducted from their credits.

That ‘upsell’ will be managed by Struum. A roadmap item is to allow new Struum subscribers to tick off, during sign-up, any SVOD services they already subscribe to, so these views can be ignored by the credit system.

Firstlight Media is an established streaming tech provider with AT&T and Fox among its customers. The company lists encoding, origin/packaging, authentication and billing, DRM, player/app development and analytics among its many capabilities. The deal with Microsoft Azure will guarantee the agility and scale to grow the Struum service rapidly.

Among the highlights of the Firstlight Media contribution, as outlined by Juan Martin, CTO & Co-Founder at Firstlight Media, is the ability to ingest hundreds of thousands of content assets very quickly from hundreds of partners, plus its content asset management (the company says it has a very programmer-friendly CMS) plus the data science that will underpin the personalisation of content discovery.

In terms of the content ingest and management, Martin says the backend challenge is handling different formats and metadata approaches and both enriching and normalising the metadata, as well as making the assets available to consumers quickly. Rights management is another task that falls to the Firstlight Media backend. If the service grows as planned, the system will have to handle assets from multiple partners in international markets.

The costs of running the Struum service will be amortized over a large number of VOD services and their content libraries. The new streamer claims it will therefore provide a cost-effective way to surface and present content for the media companies that use it.

Firstlight Media is using advanced metadata enrichment techniques including AI to better understand content like, notably, its emotional intent. Combined with the CMS, this means the relationships between different content can be ascertained, leading, in a simple example, to content collections, as well as advanced recommendation.

Compared to content discovery hubs that offload consumers to apps using deep linking, Struum will ensure less friction in the consumer-to-content journey, the company believes. And of course, nobody is going to be pointed to content they cannot view within an existing subscription (because the Struum subscription will cover it).

Pastor emphasises the importance of the content brands that will sit under the Struum umbrella. “Brands are critically important for us and there is brand attribution throughout the service to drive value to our partners as well as to communicate the value of our subscription to the consumer,” he says.

Andre Christensen, CEO and Co-Founder of Firstlight Media, says of the project: “Struum is uniquely and innovatively attacking a growing industry problem: consumers’ frustration around finding, paying for and accessing content in a crowded SVOD market.

“As a result of our work with Microsoft and the Azure cloud platform, Struum will be able to achieve rapid service velocity at launch, to scale as subscribership grows, and to nimbly deploy new, cloud-based features that promote engagement, monetisation and long-term value.”

Paul Pastor, Chief Business Officer & Co-Founder at Struum, will be speaking at Videoscape Europe – the thought-leadership event for streaming television – in March. You can find more details about the event, the agenda and how to register to the free content, here. 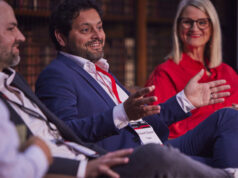 Collaboration is key to making cars the ‘second living room’

HBO Max subscribers are the most satisfied out of all major SVODs, survey finds